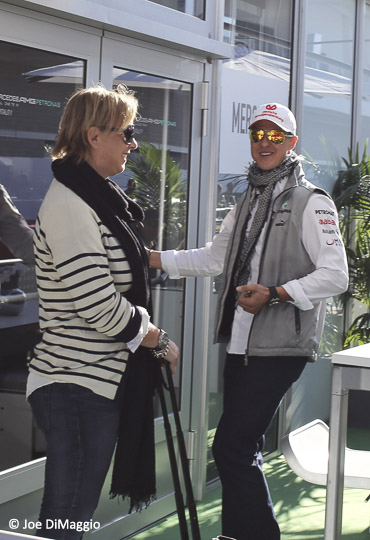 To all The Ships at Sea

We are all motivated by a myriad of passions – likes, dislikes, and history. The list is infinite. When I made a decision to call my Editor and tell him I wanted to photograph the inaugural U.S. Grand Prix in Austin Texas he thought I was out of my mind. From a business standpoint his concerns were valid. So exactly why did I find it necessary to invest a week of my life into that specific race? A few reasons were I never photographed Vettel, Hamilton, or Alonso and last but not least, Michael Schumacher and I knew this would be one of his last races. When he decided to return to Formula One I called a friend, Lewis Franck a great race car writer in the U.S. and we both agreed this was not a good idea for Michael to make a comeback. We were both genuinely concerned about his well-being after his retirement from Formula One, as it’s very hard to make a come back. Both Lewis and I were extremely happy that Michael’s second retirement from Formula One left him healthy and happy. Anyone who lived on the ragged edge of F1 and the inherent dangers of open-wheel racing at upwards of 200 mph for him to leave the sport healthy and happy with seven world championships – it just doesn’t get better than that. The minute I heard the word of Michael’s skiing accident my heart stopped and I immediately called Lewis. Race Car fans, let us say a prayer for Michael that he comes out of this okay.

On a lighter moment… at pit stop practice, Michael’s F1 tub very gingerly touched my shooting vest at 55mph it did get my attention (we were both on the proper side of each other’s line.) 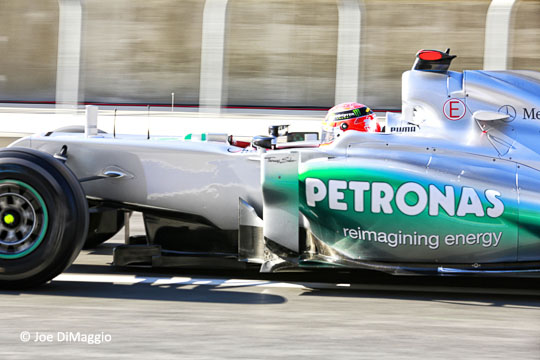 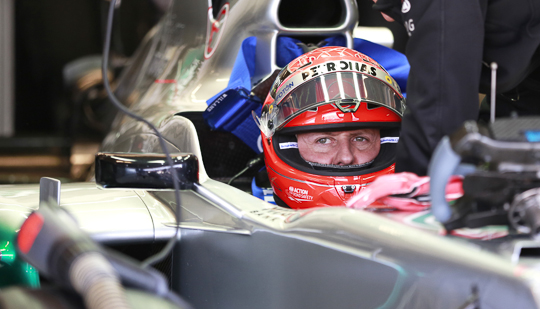 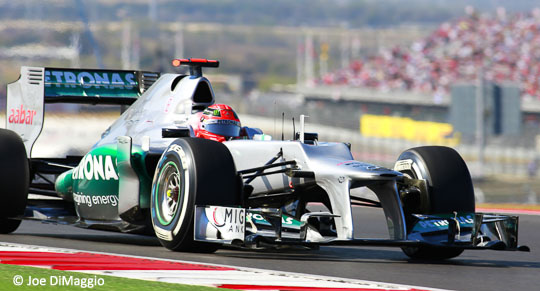 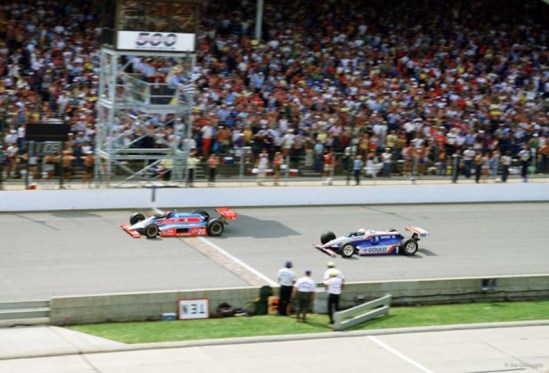 If it’s May, it has to be the Indianapolis 500. This photograph was selected by Sports Illustrated as the third greatest photograph in the last 100 years of the 500. They reproduced it in the centennial issue and on their website. That’s the good news, the bad news is they never asked me. Does the word “copyright” mean anything to anyone? Who said “power to the people”? No, it’s “power to the corporation”, step on all the people. In this society, we all have to play by the same rules. Actually, I think someone wrote that in the Constitution. To my friends; go out and make some great photos. Capture history with a camera. Life is good, life is great. Health and happiness to everybody, even SI. 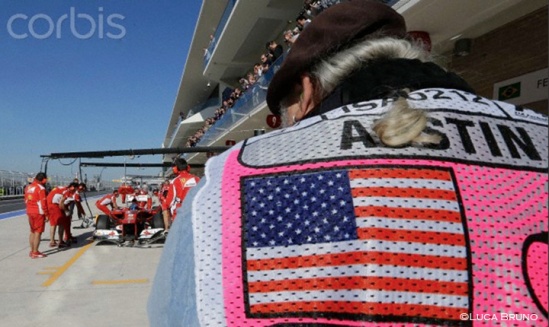 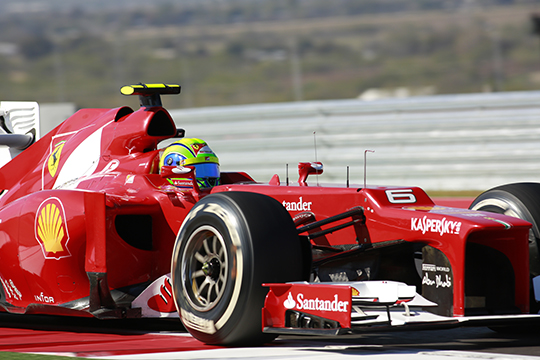 Hi to all the Ships at Sea,

Much to my surprise, while I was going through the CORBIS archives on the Formula One photographs on the Austin, Texas race, there was a shot of the back of my head and my ponytail photographing Scuderia Ferrari, Fernando Alonso, and of course the beautiful American flag on my back. It was an honor to be assigned to shoot the race. I take my beret off to Luca Bruno, a world-class shooter who captured this moment. He knows a great ponytail when he sees one. 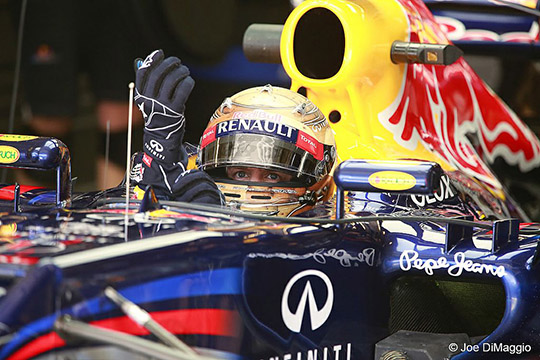 To All The Ships at Sea

Yes, I know I’m many blogs short – I’ve been running around a lot.

As I’m writing this blog I am watching the warm up lap of the final Formula 1  2012 Series.  Last week, I had one of the greatest weeks of my life, as I had an opportunity to get back into photographing the F1 series that  I started with many years ago. Whoa…I have  to stop… as the current world champion Sebastian Vettel,  just spun out on lap number two damaging his race car. Both Alonso and Massa, from Ferrari, got great starts and Alonso just passed Massa and Webber to take second place.  When I called my agent six months ago, I told him I wanted to do the Austin Texas F1 inaugural race.  In all due respect he told me, I was out-of-my-mind.  He said, “you’ve been away for quite a while and the chances of you getting a credential are slim to none.”  Much to everyone’s surprise F1 keeps impeccable records and they checked my past credentials and not only gave me a credential but gave me a full blown credential with ALL access!

As I shaped up at the credential center I ran into an old (long time) photographer friend from Mexico. He asked when was my last race as had not seen me in years.  I said, “1991 and he replied, “that was 21 years ago.”  Not until he said that, did I realize in the world of photography and F1 that was an eternity.  If you ever talk to a Boxer before he gets in the ring or an actor before they go on stage they will confide in you they have butterflies. When I stepped into the pits it took about 30 seconds and the butterflies were gone and I felt I was home again. A week before I left for Austin I went to the closest interstate to practice high speed pans.  I worked on both my inside and outside pans.  I looked at my photos and picked the top thirty and got a base for what shutter speed I needed.

There is no doubt I will write more on F1 before the year is up. I’d like to end this by saying every person I met in the international and national Press as well as all the Texans I met were great and did everything they could to get me up to speed.  The international photo brotherhood is alive and well. I’m cutting this short as I need to get back to watching the race finale. 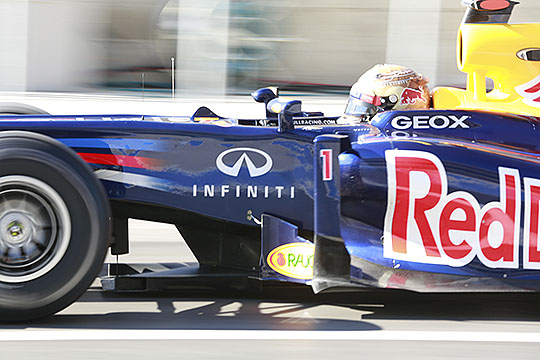 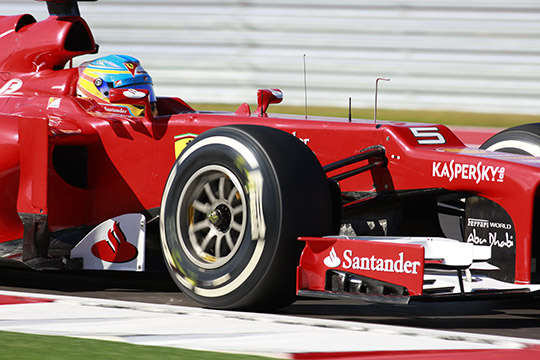