John Iacono from Sports Illustrated and I have been friends for as long as I can remember, and my former next door neighbor and fishing partner. There is no doubt in my mind that he’s one of the greatest sports photographers of our time. And yes, he’s a drop-dead sweet guy. I have never heard one bad word about Johnny Eye. Having said that, I think he should keep his tongue out of my ear. I’m not going to tell you where his right hand is. By the way, his right hand was on his high-speed Nikon camera. And I know that because I could hear the mirror box in my left ear.  Let’s be honest- if nothing else, we always have a lot of fun! You can tell by the look on my face. I’m just so giddy!

Photos ©Joe DiMaggio – Lights Out Photography and filmmaking are unlike any other means of communication, where sworn competitors can come together and work on one project and have an amazingly great time.  I guess it takes 4-5 decades to truly understand the camaraderie between your peer group. I spent quite a bit of time at the studio with my dear friend Johnny Eye, (John Iacono) who you may remember was named photographer of the year at the Lucie awards for Lifetime achievement in Sports.  Someone asked me, how do I feel about that?  I said I’m ecstatic for him; if anyone deserves it, Johnny does in spades!  He deserves 3 lifetime awards.  Being good is one thing but being great over 40 years is pretty hard to do.  Tune into LIGHTS OUT  and see if you recognize any of the Extras. Each one of us played a very difficult part – photographers ringside at a heavyweight championship fight.  Wow what a stretch!  It was a lot of fun! 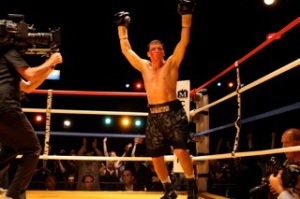 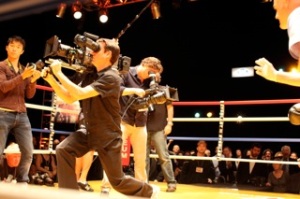 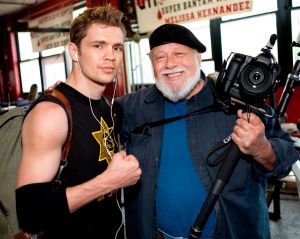 What I’m about to say has absolutely nothing to do with F stops, apertures, depth of field, or depth of focus. It has to do with the photographic community, how I was brought up in it and how it translates to 2010. When I started (x) number of years ago, there was an unwritten law that you would always try to help out a fellow photographer. As the age of the computer and internet arrived, things became a little less personal. I don’t believe anybody made a change in attitude with malice of thought but there was obviously some changes. Maybe it had something to do with business becoming tighter and tighter. To be quite honest, I really don’t know. Yesterday, I had an hour and a half conversation with one of the greatest photographers of our day, John Iacono. Johnny Eye stated at Sports Illustrated when he was 16 and I think he’s now 29, maybe a little older. We’ve been friends and neighbors for a long time and Johnny is just one of the nicest people God put on this earth. In case I didn’t mention it, he is also a great photographer. Earlier yesterday, I ran into another great photographer, Marty Rosengarten from Ringside Photos. Marty is a world class boxing photographer. There’s an old Italian adage for someone like Marty, he’s a mench. Marty was kind and generous enough to make a photograph of me with my dear friend Yuri Foreman. In the five years I’ve known Yuri, no one has ever done that- so Marty was the first. Exactly what is the purpose of this blog? What I’m trying to say is the family/community of photographers is alive and well. Thank you Marty, thank you Johnny, thank you Yuri.