I had an opportunity to photograph Paul Newman six or seven times. One of the most beautiful things about Paul is he was a regular guy. He rolled up his sleeves (sometimes a sleeveless T-shirt), got dirt under his fingernails, and treated everyone as if they were his equal. Not pretentious, not a superstar (but of course he was!). In an impromptu environmental portrait I asked him why he was so comfortable in front of the lens; whether it was film, or film. He said to me when he was making a photograph, he tried to put the person at ease by saying “You’re beautiful, and you’re as pretty as you feel”. Please understand I didn’t tape record the conversation, so obviously, I’m leaving a few things out. He then said to me “Sometimes the camera falls in love with the person you’re photographing, and you cannot make a mistake. If the camera loves you, it’s all good”. Hannah is obviously no Paul Newman, but the camera loves her. I always remember that I am not the most important part of the photo; it’s all about the person you’re photographing, both their inner beauty and their outer persona. 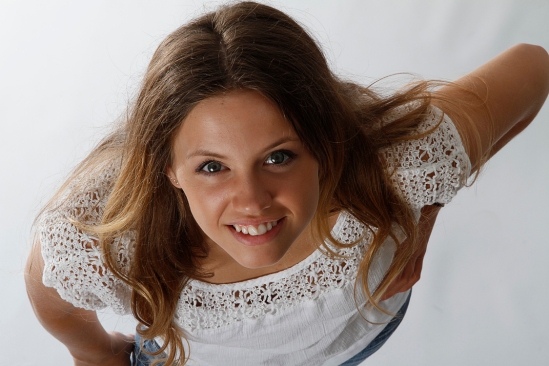