To all the ships at Sea, 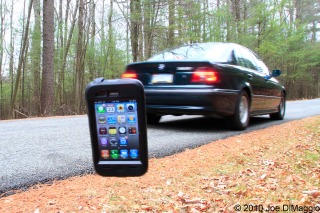 My partner and my son decided they have to have iPhones.  I tried to resist strongly for a while but figured if they had to have one there was something to it.  It was something I just did not want to do, but figured maybe I was behind the times.

Our son insisted that my iPhone be encased in a heavy duty Otter box case because I am sometimes tough on my phone. I guess that was a good thing because yesterday I went to physical therapy for almost two hours then came back and decided to take me best friend Ace for a three mile walk. Getting into the car I decided to take his bell off, but my hands were full so I placed my iPhone on the roof of the car. I drove the four and half miles home, went in, and went back to the studio for some editing work. Dylan was just back for a visit after  being out at sea for a month filming tuna fishing. He took the car downtown to get the mail, I didn’t think anything of it but he was gone for an hour and a half. He walked in and said something to the effect that there was a minor problem with an iPhone.  Told him that if he broke his company iPhone I was not going to replace it (he has the iPhone 4). He then began to tell me on his trip back he heard a scratching sound and then a thump, the phone hit one of the struts on the roof rack before it decided to fly out at 60mph on route six. My son looked into the rear view mirror when he hit the bump and he saw the phone hit the pavement and preceded to do a Nascar tumble, all this time I’m thinking its his phone, and I’m not happy. Then he informed me it was my phone. He handed back to me a phone without a mark on it, the case was a little chewed up but it worked perfectly. It wouldn’t allow me to make any phone calls but with ATT that was normal. 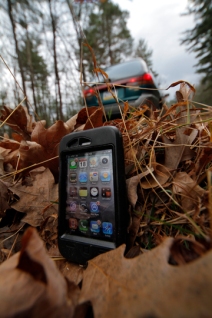 If you are crazy enough to buy an iPhone I strongly suggest you buy an Otter box case. By the way I’ve dropped it three or four times without any problems. What the hell does this have to do with photography? You forgot my iPhone is a camera. Next week I’ll tell you a story about a Nikon F, Yankee  Stadium and a Volkswagen. The Otter box case is drop dead stupendous, it is more than enough protection I will ever need to protect my iPhone camera.