Somewhere around 1970 something, I had a Sports Illustrated assignment with Walter Ioos and we were up in Boston. If you don’t know who Walter is, he’s probably one of the greatest all around photographers in the last 40 years. Walter is a true Renaissance man. When he puts his mind to it, and his eye to it, he can photograph anything, and pretty much better than anyone else. Walter, by the way, had no secrets. He shared all of his inside tracts on how to make a great photo. He has a great level of confidence.

After a long day of shooting, we decided to have dinner on the north side of Boston, and Walter was astounded that I dragged along my camera. He said “How come you’re taking your camera?” I explained to him, you’ll never know when you will run into something you want to photograph. I think he thought it was pretty funny.

On my way to get a Fed Ex, I went to the door, and looked at a cluttered kitchen. My eye was grabbed by an orchid that was having its water changed. I went back to my office, and I took a couple of snaps. I think of it as an exercise, an exercise in visual literacy, or looking from the inside out. 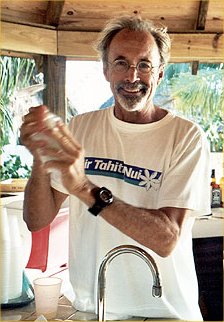