The other day I was privileged to have lunch with a very dear friend of mine. Don Sergeant, an extremely bright, creative and dynamic Vietnam war veteran, whose main responsibility in this world is to save lives; a beautiful man. When we finished lunch, I  stopped by The Forge Gallery and said hello to another dear friend, Phil Rachelson. Phil is not only a great artist, he also has the ability of generating great designs in his gallery. He displays the artwork in a way; it’s pleasant to the eye and geometrically sound. It’s a special Christmas show, to all the ships at sea, if you have an opportunity stop by and support the artists and the gallery. Great art at great prices. -Joe D. 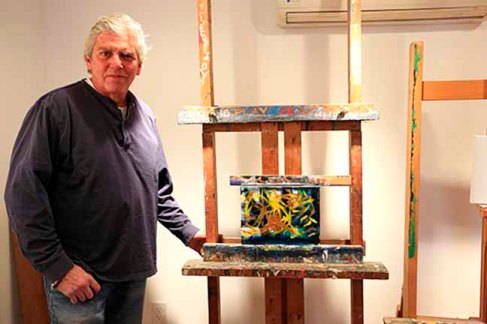 To all the ships at sea, last week ranged from brutal to inconceivable, and back to brutal cubed. I was suffering from negativity, which was probably my doing because I allow things to bother me. Well, enough of that. A young man showed up on our doorstep with a number 2 pencil and a tape recorder and interviewed JoAnne and myself. Separately, as a matter of fact, which I thought was a pretty innovative way of doing it (“no white lies, you’ll get caught!”). There’s something about a consummate professional; there’s an aura about them. In my experience, they’re bright, intelligent, soft spoken, and honest. I’m talking about Michael Hartnett. I normally have some minor defense mechanisms in place, but Michael was able to have me drop them in about ten seconds. Great interviewer, again I was totally impressed. We talked a little bit about some of his art and he showed me this beautiful illustration with which I fell in love. Then he explained that he makes them in the woods. Makes a record photograph and within hours it disappears. The initial concept threw me for a loop. You mean I can’t take it home? I can’t put it on my wall? It’s not archival? It’s here today, gone tomorrow? Then I gave it a little bit more thought and realized how brilliant it is. Just like us; here today, gone tomorrow. He’s written a novel called Tales of Allamucha; expect to see it on Amazon in the upcoming future. What a breath of fresh air! This is Joe DiMaggio signing off. PS, he was writing an article on JoAnne and myself for The Milford Journal. Check out the July issue.