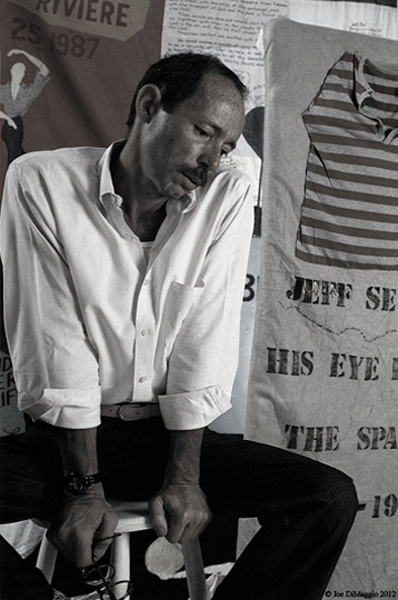 To all the ships at sea, working photographers make photographs for many reasons. One of the number one reasons is money, and it’s not a great motivator. Once every four, five, or six years, you have an opportunity to meet not only a great and powerful person, but a genuinely beautiful human being and you’re asked to do an environmental portrait. In this particular case, that person was Vito Russo. In my opinion, he was possibly the most powerful person on the planet, when it came to being an advocate not only for gay rights, but for pushing the envelope to seek a cure for the dreaded HIV/AIDS. I would love to tell you that we were extremely close friends, but that would be a gross exaggeration. I met him two or three times before I photographed him, and as with all great relationships, my love for him was predicated on respect. Last night at about 10:30, with my eyes starting to drip blood as I was editing 80 gigs of video (throwing out the unacceptable footage), I turned the TV on and there was Vito. Somewhere towards the middle of the documentary, up popped one of the 300 photos I had taken of him over the years. As a filmmaker, I was extremely proud that they held that photo and then zoomed in, and for HBO it was shown for an eternity. Then again, they used it at the end of the piece. Twenty-four years ago, the last thing I remember is Vito and I in a warm embrace at the end of the shoot. Photography is more important than money; it’s history, visual literacy that will not allow us to forget. Sometimes, even I forget the power and beauty of a still photograph.