There comes a time when my words are just not important . The last time I saw Toshi Seeger was June 9th at the Strawberry Festival in Beacon.  She looked absolutely beautiful next Pete’s side as she’s been for almost 70 years.

I did not know Toshi but respected her. In an interview on Thursday Pete Seeger called his wife of almost 70 years “the brains of the family” and said it was she who figured out how to turn his artistic concepts into a commercial successes. “I’d get an idea and wouldn’t know how to make it work, and she’d figured out how to make it work,” he said.

My dear friend Jerry Beaver who is the director of the Black Bear Film Festival and owner of the Milford Theatre, after a Pete Seeger concert at his Theatre came across a piece of rolled up paper with words on it by Toshi, which he believed belonged to Pete.  He knew how much I loved Pete and gave me this piece of paper on loan to be used for a future blog.  When he gave it to me he did not know it would be used for my blog tribute to Toshi Seeger.  I am posting it for the world to see. 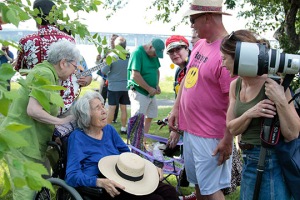 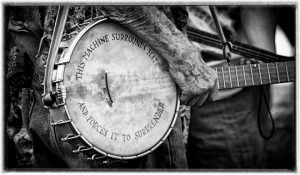