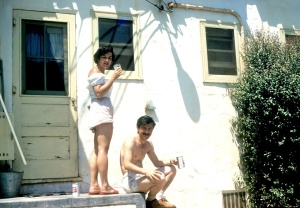 Approximately 20 years ago I was contracted by Saatchi and Saatchi to do a 20 minute short film on a multi-billion dollar corporation in California.
I had a relatively small budget of $350,000. My first job was to hire a production company. I also hired a co-director. My responsibility was producer and co-director. Everything was in order and three days before the shoot, the director was called out of town on another project. He was replaced by Charles Rudnick. Even though I had no relationship with Charles, but he was the consummate professional. There wasn’t anything he couldn’t do hands on himself. You couldn’t get a better film maker in that particular situation. When the crew was scheduled to go from Los Angeles to San Francisco, the first director wanted to come back and I said “no way Charles is going to complete the film with me” and that’s exactly what we did. Thus a long, prosperous relationship started. Charles and I have a mutual respect for each other and we’ve worked on several projects over the years. Effectively we’ve become interchangeable. Okay, maybe I’m stretching it a little bit. In many ways, he’s drop dead fabulous.
Charles’ wife, Carmen, is the owner/chef of Tommaso’s, one of the finest & well-known Italian restaurants in San Francisco. On any given day, you can walk into Tommaso’s and see John Waters, Nicholas Cage, Francis Ford Coppola, or even my dear friend, Bill Shatner and his lovely wife Liz. I just received a phone call from Charles to tell me that his mother passed away. She was a very special lady. Forgot to mention…Charles’ father was a physicist at UCLA.
Charles sent me the above photo of his parents.
Isadore Rudnick (his dad)
Mildred Rudnick Obituary: Mildred Rudnick’s Obituary by the Los …