To all the ships at sea, I think it’s safe to say most Americans believe that bigger is better.  For that matter, maybe everybody on the planet believes bigger is better.  At last count, I believe I have three extremely large Gitzo 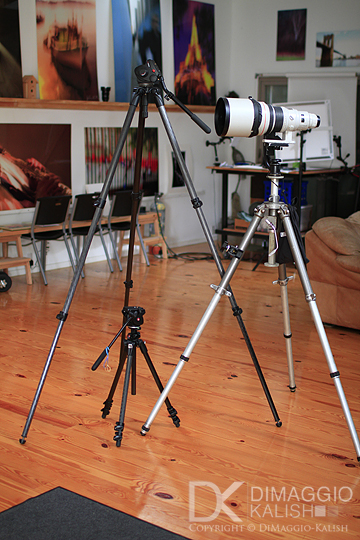 and Manfrotto tripods.  These are the BIG boys.  The older, larger Gitzo will hold over 200 lb’s.  Please do not ask how I know what for sure.  In addition to the repertoire, we have an extremely large Manfrotto carbon fiber which is awesome for large video work.  In the mid-sized tripods I’ve lost count, but we certainly have four to five.  Each with what I believe to be  special application.  Anybody who knows my works knows I like both Gitzo and Manfrotto standard monopods and more recently I’ve become a great fan of the Manfrotto video monopod (my DP and partners have been screaming for years “This is a good way to go” and of course, being the hard-headed person that I am, didnt pay much attention.  But now I do and it is a great tool).

Now for the purpose of this particular blog.  At the end of my repertoire of tripods is a super-light super-small Manfrotto 190 Pro3 with a 701HD video head.  To be honest, I never paid it a whole lot of attention until I decided to do a 60 second piece for CBS Sunday Morning on ice, and a waterfall & damn covered in the stuff.  Because the areas are extremely small and difficult to get to I decided to break out the 190 Pro3 tripod.  Much to my surprise, it was unbelievably great.  I was able to sneak into little nooks and crannies and got the 1080I footage I was looking for.  My philosophy (and I believe I coined the phrase back in the day) is standardization and simplification are now going to standardize on this tripod for critical location work.  Bigger is NOT necessarily better.  And as we all know, it’s in the hands of the photographer or filmmaker.  Keep your mind open for new ideas, and keep your eye constantly looking for new imagery.  Believe it or not, it’s still there.

What the heck is that Sartek doing in the frame?!