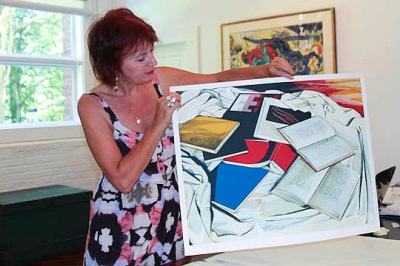 About 10 years ago I had a amateur photographer ask me to accompany him to a framer’s shop in a small town in PA. He had to pick up some large pieces. We pulled up to what appeared to be a huge Brooklyn New York Factory. Suffice to say it was overwhelming. We walked up a couple flights of stairs, I looked around and there was an awful lot of space. He returned home, I went back to the studio and figured I’d never see that space again and you know what I was right. I will never see that space again.
Yesterday my partner JoAnne and I took a ride to see paPA. As it turns out it’s the same factory, whoops, no not the same! Both Ron & Yvonne Parker have taken a turn-of-the-century Silk Mill and made it into an absolutely magnificent gallery space. Oops not a gallery space but an ArtSpace. From ceiling to floor it’s drop dead fabulous! It’s drenched in beautiful available light and when the available light starts to diminish their spotlights take over. If it was empty and did not have one piece of artwork it would be amazing.  But once you add the eclectic artwork, you as the visitor take a voyage to a different time and place.
Both Ron & Yvonne are thinking way outside the box. They’ve subdivided their 33,000 square feet into three separate spaces and that’s just the first floor.  You can envision an artist’s loft in the second space which could house at least a dozen different artists all working at the same time. Actually upwards of 20 if they wanted to.The third space you could envision as an art space for music, poetry readings etc. You could put anything in there. Then there’s a space, let’s call it the boiler room that would make a perfect theatre for multi-media shows and films. The acoustics are really great. All of this on the first floor.  I will let Ron and Yvonne tell you about the rest. The outside area is large enough to put together anything from an outdoor concert to a open air art show similar to the shows in Greenwich Village. Granted it’s not around the corner but it is more than well worth a visit.  I can’t wait to see what it will look like next year. They’ll probably utilize More’s Law… They have a special opening next Saturday “Yvonne Parker and Friends” July 16 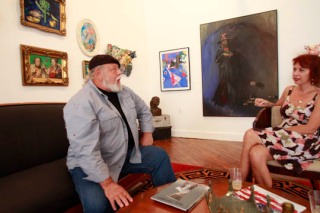