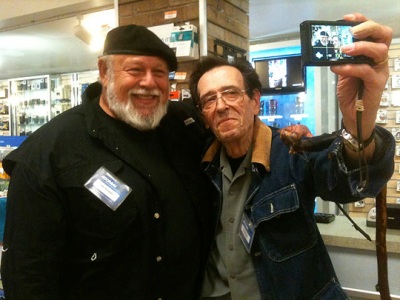 Somebody once said, bad things happen in Threes. Yesterday was the exact opposite. It started out very good, went to great, and became fantastic. Both JoAnne and I had a shoot at the Paul Taylor Dance Company with two world class modern dancers. The shoot was primarily JoAnne’s but I tagged along to help with logistics, security, and shot a short video of her technique. The dancers Cisco Graciano and Michelle Fleet were two wonderfully easy going and talented people.The space was awesome. It doesn’t get better then that. At the end of the shoot, we followed up with a short but great meeting with our publisher Paul Laddin. Our dear friend Monica Cipnic was kind enough to invite us to the Grand Opening Party at Adorama Professional. I’ve been to a lot of parties and this one was over the top. The inspiration and execution fell on the shoulders of Anne Cahill and suffice to say, she did a magnificent job and a good time was had by all. Last but not least, I had an opportunity to catch up with some old friends and made some new ones. It was great to see Bill Eppridge along with his wife Adrienne, there is no doubt Bill is definitively one of the finest photographers in our day and also happens to be a world class gentlemen. As I mentioned to Anne, they don’t make them like this anymore. After all these years, I had the pleasure of meeting Mr. Mendlowitz.  There’s an old Italian word to describe him – Mensch.