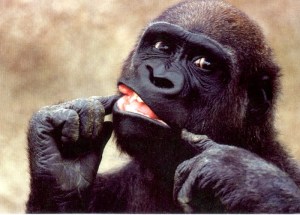 January 1st of any particular year doesn’t really do it for me. I normally celebrate the Chinese New Year. The reason for that is, Chinese New Year was my first date with JoAnne. It is more meaningful to me. When I hear Auld Lang Syne, I well up and think of the past, and then with any luck at all, think of the future. I was moving my office to another building, and I stumbled across this photograph of the Gorilla. It has an interesting little side note to it. It was a photograph originally done for the Image Bank (now called Getty Images.) I received a call from Sally Lloyd, the greatest editor any person could have and one of the founders of the Stock Market that is now Corbis. She told me that the gorilla was sold to Avanti Greeting Cards. No big whoop, until we found out that it out-sold every other greeting card that year! As a matter of fact, they asked permission to run it again for a second and then a third year! Once a year, I’d walk down to the local book store, stand in the corner, and watch people buy cards. I’d watch them pick up the gorilla card. It came in two flavors, one Happy Birthday and one blank version. I just watched their faces and their smiles. One time I walked over to a woman and I asked, “Why did you buy that card?” and she said, “Because I just love it!” You can’t make this stuff up. Hey, here’s some interesting news, that I totally forgot to mention. Chinese New Year, this year, falls on February 14th and that’s Valentines Day too. JoAnne and I will be teaching a workshop for Adorama in Chinatown in NYC on Chinese New Year/Valentine’s Day & celebrating our anniversary. Photos © Joe DiMaggio 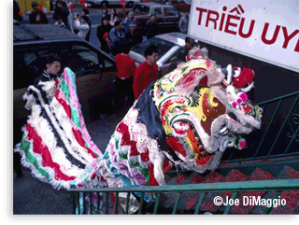